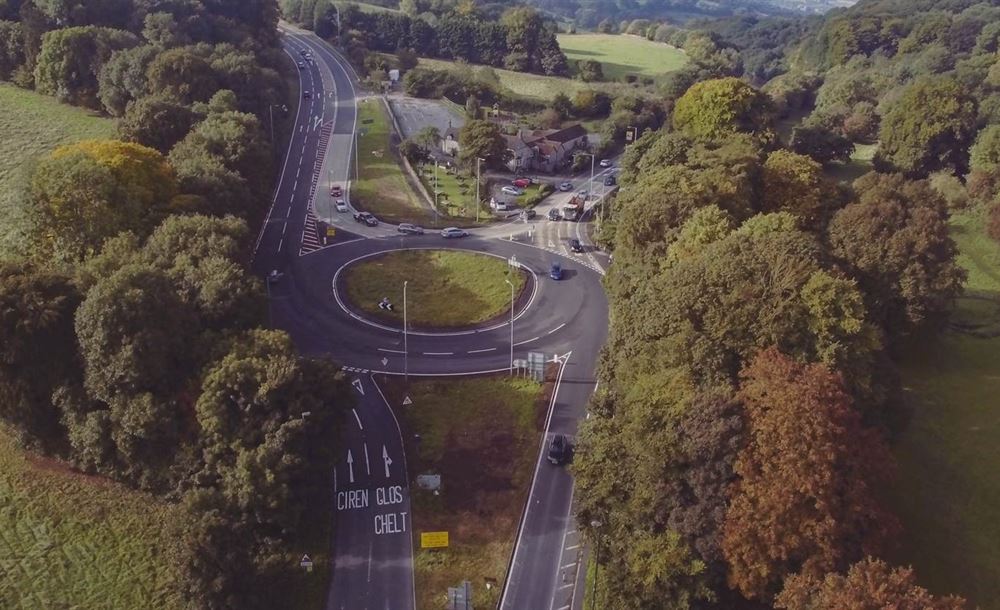 Eurovia Surfacing have successfully completed a programme of resurfacing works between the A419/A417 Air Balloon roundabout and Birdlip junction. The works were tendered by Road Management Services (Client), designed and managed by their consultants, Kier Mouchel.

Eurovia Surfacing secured the contract, valued at £750,000, and commenced works on the 7th September and finished to programme on the 30th September. The works were carried out at night between 20.00hrs and 06.00hrs with the potential of severe financial penalties for late opening to traffic.

The scheme consisted of major kerb level adjustments on the roundabout and approaches, minor drainage works, electrical works, signage and posts, including the refurbishment of existing footpaths and reshaping and major changes to the levels of the roundabout carriageway surface.

Further planing and paving was carried out on the A417 dual carriageway section west of the Air Balloon roundabout.

Traffic Management and electrical work for the scheme was delivered in-house by Ringway Infrastructure Services (West Unitaries), and Eurovia Specialist Treatments carried out the high friction surfacing to the approaches on the roundabout.

The Contract Manager for the scheme, John Pollard, was well supported by his site staff; Dave Embling, Dave Witts, Jason Dunne and Alfie McNulty. The surfacing was carried out by Mark Lock and Neal Mounty’s team.

The Clerk of Works for Mouchel, Jamie MacArthur, commented: “The quality of work is excellent and so I love working with these guys.  To me they’re one of the best surfacing teams in the country.”